This sample demonstrates the ability to use the SDK for aligning multiple devices to a unified co-ordinate system in world to solve a simple task such as dimension calculation of a box.

This code requires Python 3.6 to work and does not work with Python 2.7.

Place the 2 cameras in a similar way as the picture 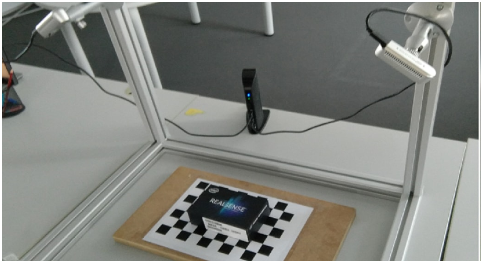 Place the calibration chessboard object into the field of view of all the Intel RealSense cameras. See example for a target below.

Update the chessboard parameters in the script according to the target size, if using a different target than the one used for this demo here.

Once the calibration is done and the target object's dimensions are calculated, the application will open as many windows as the number of devices connected each displaying a color image along with an overlay of the calculated bounding box. In the following example we've used two Intel® RealSense™ Depth Cameras D435 pointing at a common object placed on a 6 x 9 chessboard.