Frame metadata is a set of parameters (or attributes) that provide a snapshot of the sensor configuration and/or system state present during the frame's generation. The attributes are recalculated and updated on per-frame basis. librealsense2 supports querying a set predefined attributes as part of the frame data available to the end-user. In this explanatory we will overview

The library's approach on metadata is that any piece of data that provides an unique frame-related info is a potential attribute. Therefore librealsense2 does not limit itself to hardware-originated data, but establishes an infrastructure to capture and encapsulate software-originated attributes as well.

The low-level design and implementation follows those two guidelines:

When a new device is recognized by librealsense2 the internal resources for its management, including UVC endpoint classes, are allocated. The UVC endpoints perform registration for the specific metadata attributes. In the process a dedicated metadata parser class will be assigned to handle the actual job of de-serializing and validating an attribute.
Note that each metadata attribute requires an explicit parser, and querying an unregistered attribute will result in an appropriate exception raised by the library.
With the metadata handlers in place, the inbound frames for the specific endpoint can be queried for the requested attributes.

The metadata registration flow is summarized in the following diagram*:

Note the diagrams present the high-level design. The actual implementation may differ. 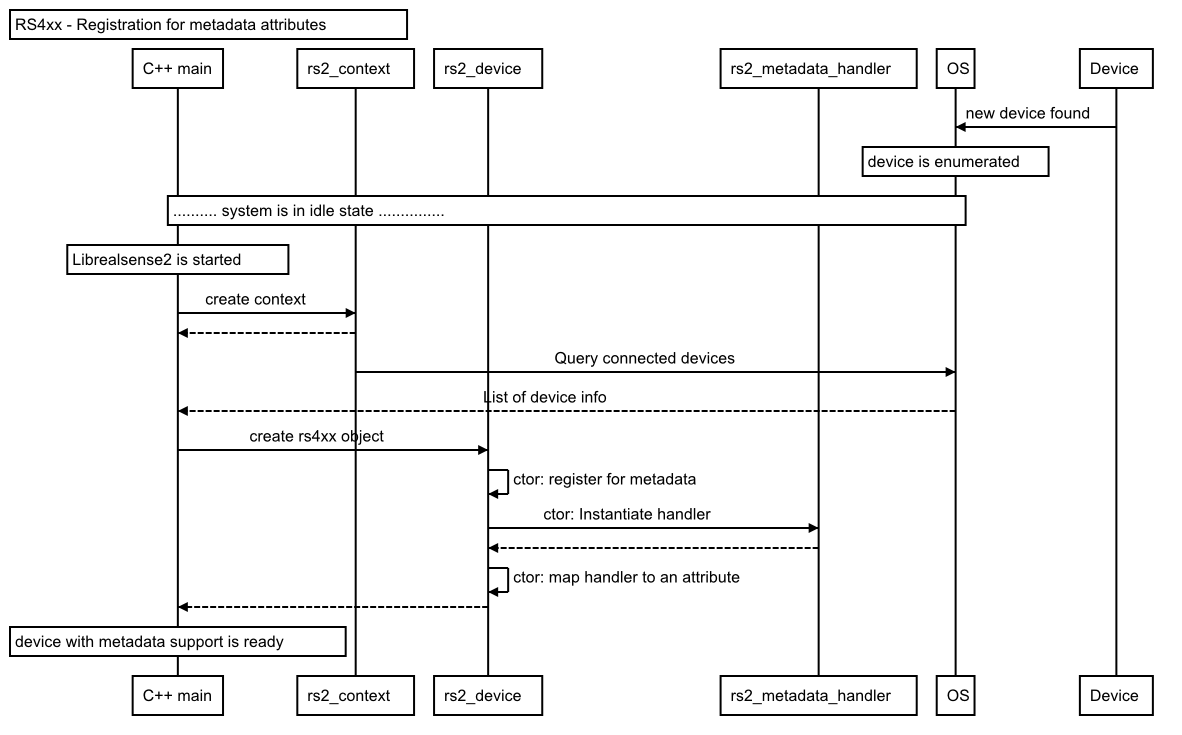 When a new frame is received by Host, librealsense2 backend is responsible to process and attach the metadata attributes.
For hardware-generated attributes, the backend will checks whether the metadata payload is valid. If positive, the metadata payload will be stored along with the pixels data in rs2_frame object. Since querying the attributes is optional and in many cases will not be requested, the payload is stored as raw data, and the library waits for the appropriate API calls to do the actual attribute parsing.
The backend is also responsible to prepare and attach the software-generated attributes to the frame data. And contrary to hardware-originated data, those attributes will be generated to all frames.

Metadata attributes propagation from the library to the user code is described in the following diagram: 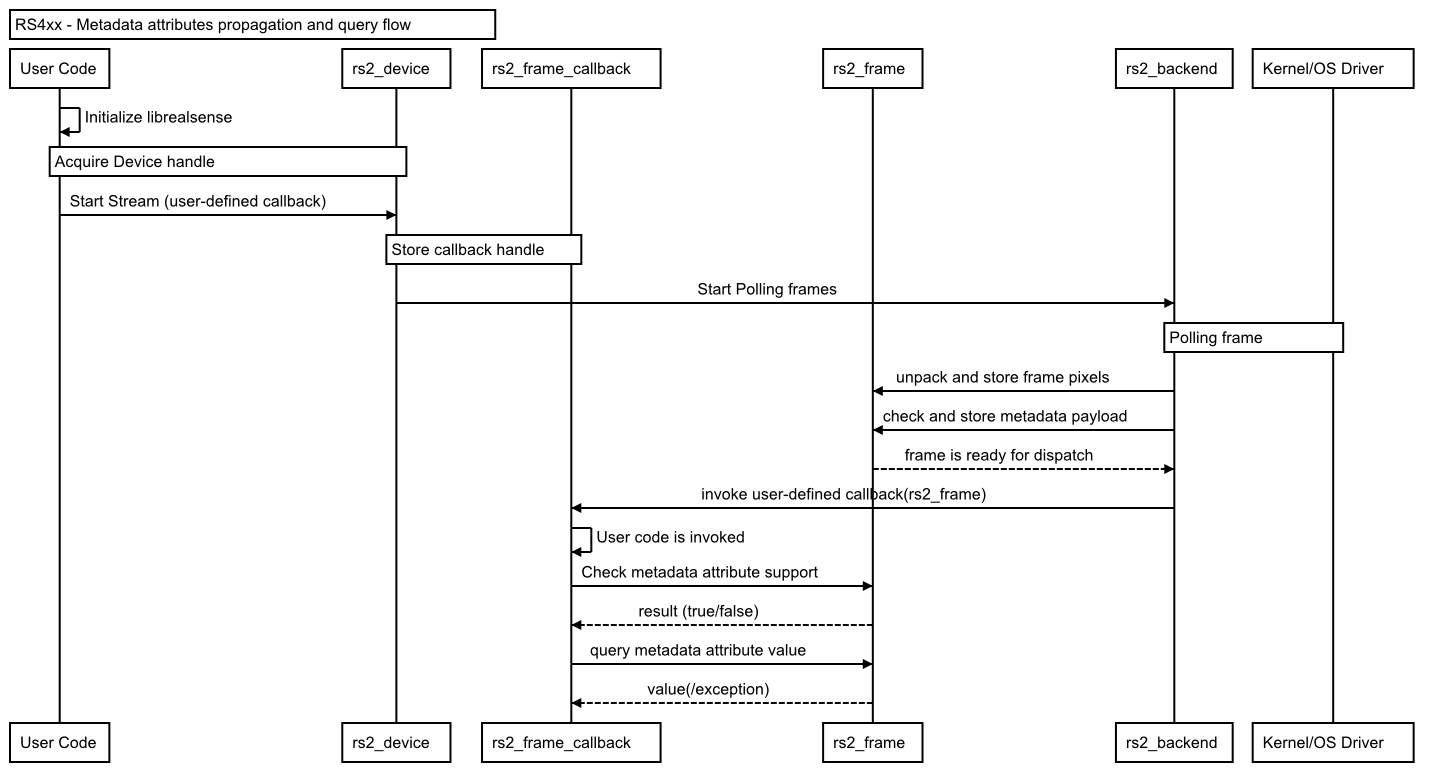 verifies that the hardware and software-applied preconditions for metadata parsing are met:

will invoke the metadata parser to read the actual value from metadata payload. In case the attribute's origin is other than the payload, such as Auto-Exposure for Fisheye stream, then its value will be calculated internally by librealsense2.

The envisaged mode of querying metadata attribute is check-then-query

Calling rs2_get_frame_metadata without testing for attribute support may result in librealsense2 generating an exception. This is a design decision consistent with the error-handling model employed by librealsense2.

In order for librealsense2 to get access for device-generated attributes the following system preconditions shall be met:

Linux OS - the standard Linux UVC driver does not provide metadata support. librealsense2 package includes metadata patch for uvcvideo kernel object. The patches are intended to be deployed with Ubuntu 14, 16.01/02 LTS with kernel versions 4.4, 4.8 and 4.10, and are applied as part of Linux backend installation . See Linux installation-guide for more details. The patches were also successfully ported to Yocto-based distribution and made available for Yocto Reference Kit based on Poky 2.1.2 with kernel version 4.4.26.

The custom payload comprise of several data chunks ("C" structs) with multiple attributes each. The chunks are categorized as calibration/configuration/capture/status.
During streaming the chunks are arranged into ordered sets. For instance, given attributes chunks named a,b,c,d,e,f,g, the possible sets could be {a,b,c,d}, {a,f,g,d}, {d,e,f,g}. The design requires ,though, that the essential frame attributes, such as Frame Number and Timestamp shall be included in all configured sets, to allow a consistent track of the frames arrived.

During the regular operation course the firmware internal state machine decides which attributes set to generate for the current frame. For instance, the first frames will be dispatched with configuration/calibration payloads, while the rest will carry the capture attributes.
From the user's perspective it means that a properly registered metadata attribute may still not be available for some frames, as metadata generation is governed by firmware design.

Updated over 4 years ago