The goal of this sample to show how we could estimate visual latency with computer vision.

This method has a lot of unknowns and should not serve substitute to proper latency testing with dedicated equipment, but can offer some insights into camera performance and provide framework for comparison between devices / configurations.

Why is Latency Important?

Visual latency (for our use-case) is defined as the time between an event and when it is observed as a frame in the application. Different types of events have different ranges of acceptable latency.

USB webcams usually provide latencies in the order of tens-hundreds of milliseconds, since the video data is expensive to transmit, decode and process.

How this sample works?

The demo relies on the idea that if you look at a clock and a video-stream of the same clock side-by-side, the clock in the video will "lag" behind the real one by exactly the visual latency: 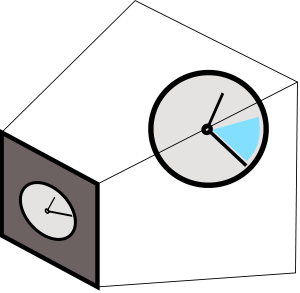 The demo will encode current clock value into binary form and render the bits to screen (circle = bit is on):

The user is asked to point the camera back at the screen to capture the pattern.

Next, we will use Hough Transform to identify sent bits in the rs2::frame we get back from the camera (marked as black squares)

To make sure expensive detection logic is not preventing us from getting the frames in time, detection is being done on a seperate thread. Frames are being passed to this thread, alongside their respective clock measurements, using a concurrent queue.
We ensure that the queue will not spill, by emptying it after each successful or unsuccessful detection attempt.

Uncomment one of the following lines to select a configuration:

You can add more than one stream to check how multiple streams are affecting each other. The demo will however just use the first frame out of every frame-set.

This method will not work for the depth stream.
D400 will produce readable results for both RS2_STREAM_COLOR and RS2_STREAM_INFRARED. SR300 infrared stream doesn't seem to capture the content of a screen.

In addition, if you want to run this demo with a regular web-cam, use the following code instead of using the pipeline object:

Updated about 3 years ago