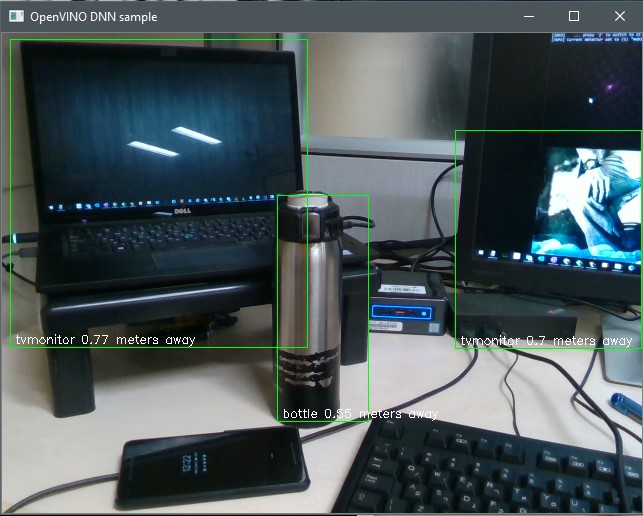 The same exact neural network is used here as in the OpenCV DNN sample, for
comparison.

A camera with both depth and RGB sensors is required.

This sample makes use of OpenCV. You can use the OpenCV that is packaged
with OpenVINO by pointing OpenCV_DIR to ${INTEL_OPENVINO_DIR}/opencv/cmake.

We can reuse the openvino_helpers::object_detection code we used in the
rs-face-vino example, but we now provide it with a different model
aimed at object rather than face detection. You can see it now recognizes a
person rather than each face.

There is a single trained model with two Intermediate Representation files
(mobilenet-ssd.xml and .bin) provided with the sample. The sample
will, however, load any model present in the current directory and is able to
switch between them at runtime, allowing some experimentation.

The object_detection class does have requirements from the model: it is
expected to have a single input and output!!! (bounding box, classification,
confidence, etc.), and will be rejected otherwise.

You can see the inputs and outputs of a model listed in the .xml file. Search
for a layer with type="Input" to find the inputs. Similarly, the expected
output layer is of type="DetectionOutput".

Some neural networks (e.g., the version of Faster R-CNN available with
OpenVINO) have two inputs, adding an additional layer for more information.
Some effort was made to support such models. Feel free to experiment.

Each model can optionally provide a .labels classification file to help map
the output "label" integer into a human-recognizable name such as "person",
"bottle", etc.
These are not provided by the OpenVINO model zoo and need to be created
manually according to the classes used when training the model.
See the format in mobilenet-ssd.labels for an example: one line per
classification, starting at 0 (which is expected to be the background).

The MobileNet models are intended for use on mobile devices and so their
performance is high and they are suitable for use on the CPU. More advanced
models can be more accurate or provide better classification but may require
acceleration using a GPU or other device.